The United Nations have rejected a damages claim for the cholera outbreak in Haiti that has now claimed almost 8,000 lives. The outbreak began in October 2010 and is currently the worst outbreak of the disease in the world having infected nearly 600,000 people. The claim was filed in November 2011 by the Institute for Justice and Democracy in Haiti, citing claims that the disease was inadvertently brought into the country when a local contractor failed to properly sanitize the waste of a U.N base which then leaked into one of Haiti’s biggest rivers. The UN is stating immunity from such claims under the UN’s Convention on the Privileges and Immunities of the UN, also saying that it is impossible to pinpoint the exact source of the disease despite the added claim that infected Nepalese peacekeepers were present at the U.N camp whose poor sanitation allegedly started the outbreak. The lawyers representing the cholera victims now plan to challenge the UN’s immunity in national court to seek compensation and justice for the victims. They are calling for the UN to provide clean water and sanitation infrastructure, a public apology and 100,000 dollars for victims that have lost family members. 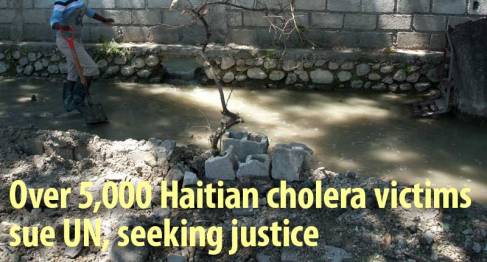 Prior to this outbreak, the country had not a single recorded case of the disease for more than a decade which makes it all the more horrifying. Who should claim responsibility for these deaths, or should it be simply put down as a careless accident that has affected the lives of so many?

Heres an interesting report on youtube summarising this story, including a clip from the documentary film ‘Baseball in the Time of Cholera’  which converges the stories of Joseph, a young boy who falls in love with baseball and the cholera outbreak which tragically affects his family.